Sensory Bin Round up for Three-Year Old

My nephew just turned three; I can’t believe he is three already!! I have been waiting to make him sensory bins for awhile now and this year seemed like the right time. Little MK played with sensory bins a lot when he was younger. In fact, he still plays with them from time to time. I had so much fun putting each sensory bin together for my nephew. One thing I did this time around that I didn’t necessarily do for Little MK was to have a book that went with every bin. I thought it would be nice for him to have a book to read with the sensory activity.

The Containers and Bases

To cut down on space needed, I started with three bins filled with three different bases.  I purchased my bins from Office Max for only $10 each. It was a great find. These bins are a great size because they can slide underneath a bed for easier storage. Here is a similar bin. If you wanted to make these bins on a smaller scale you could try this bin or this bin. I have a smaller version of the Sterilite bins to store Little MK’s legos and I really like them.

From there each bin got a total of 2-3 sensory activities to play with. I used rice, black beans, and and pinto beans. My nephew ended up with a total of seven different sensory bins.

With fall being here, I wanted to make a fall themed sensory bin. This one might be one of my favorites! I was inspired by I Heart Crafty Thing’s Five Little Pumpkin Sensory Bin (here). I opted for only one pumpkin bin. But I also found these cute lights that I think add a fun touch. This bin is great because picking up the pompom balls and putting them in the bin is great for building fine motor skills. 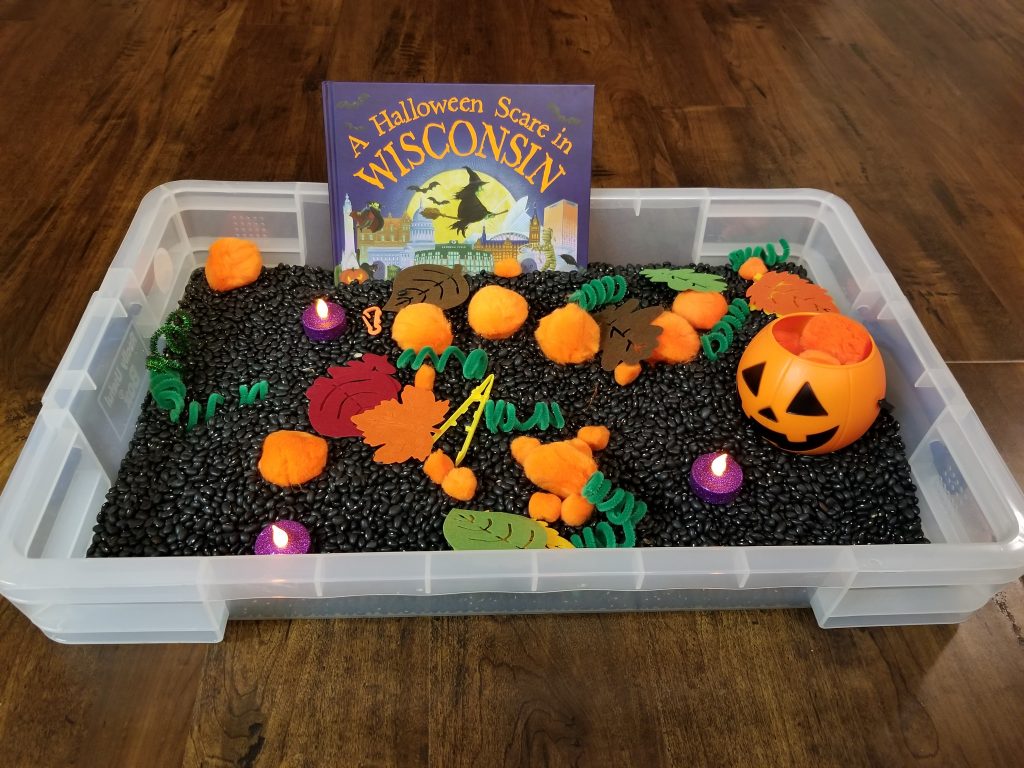 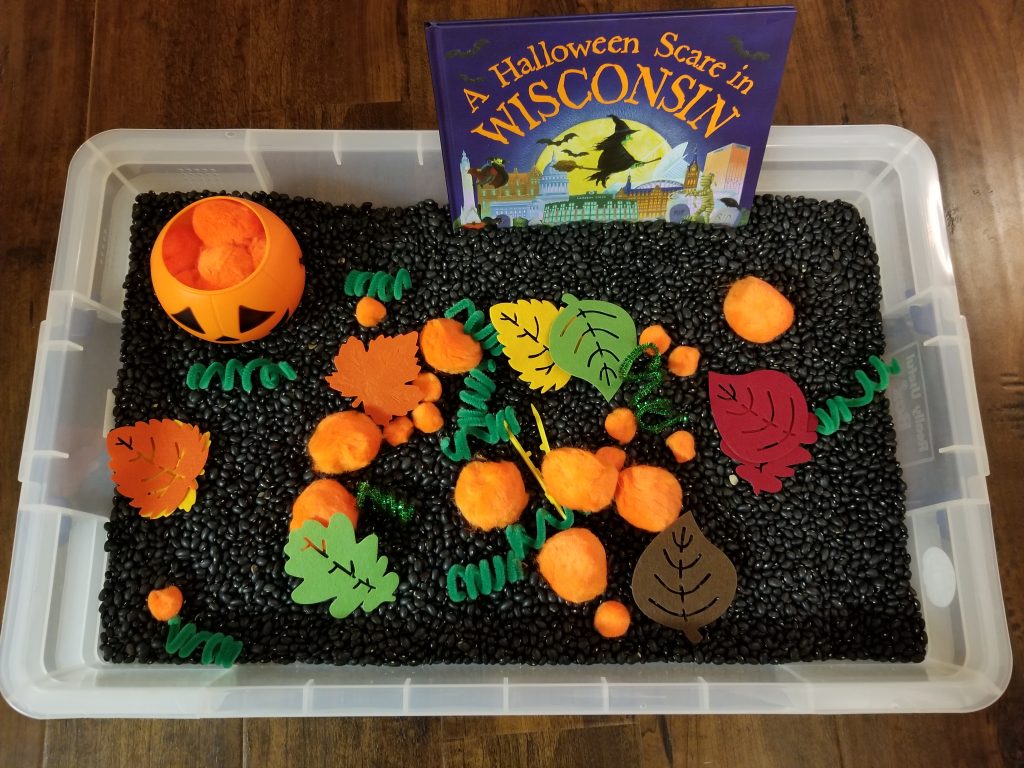 Here is everything you need to make the pumpkin sensory bin:

Next up was the bug bin. This bin has the same base (black beans) as the Pumpkin bin but has different items to go in the bin. I ended up scoring the bugs and accessories from the Dollar Store this summer. I also ended up making this one for Little MK and he has already been playing with it a ton. 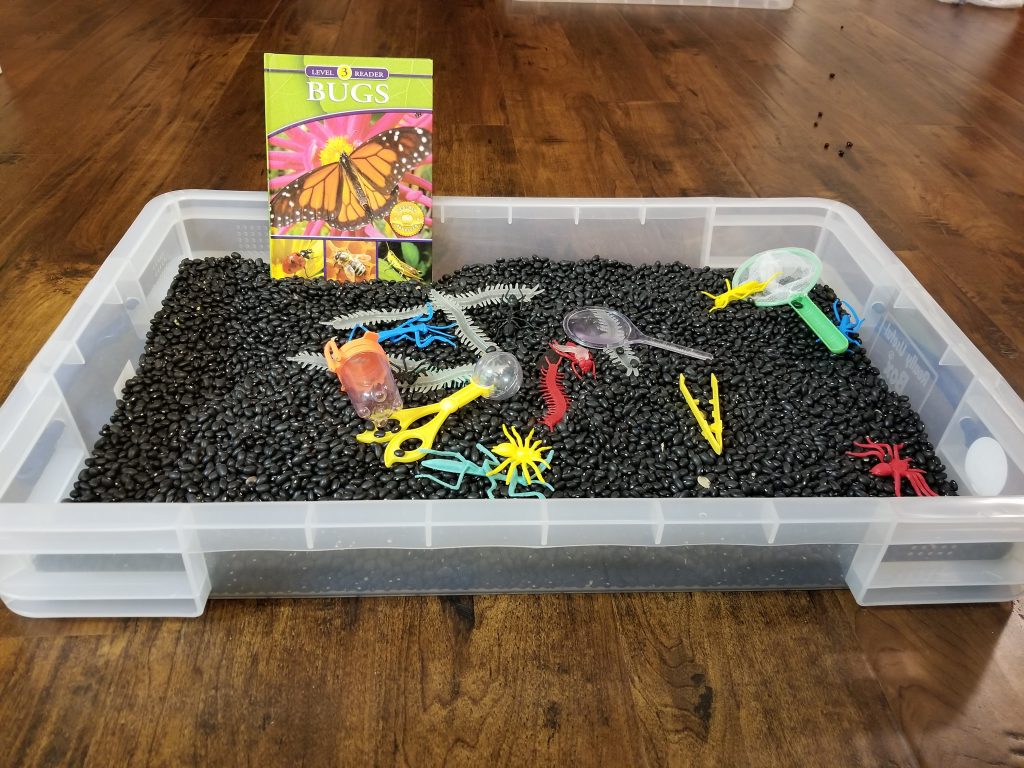 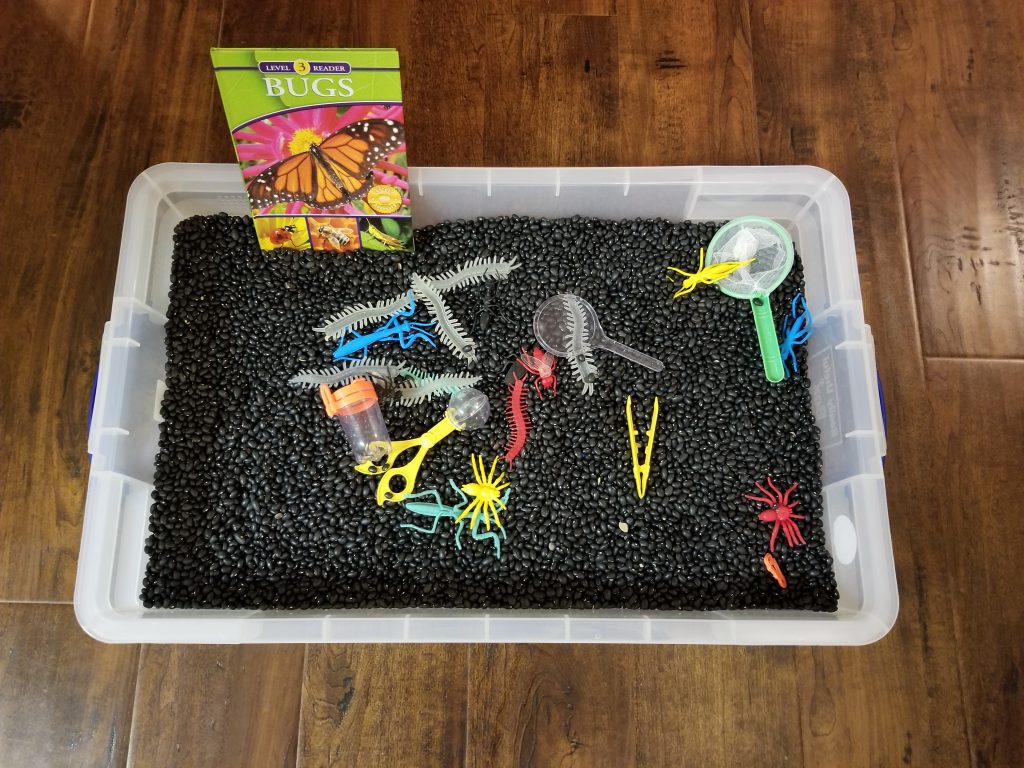 Here is everything you need to make the bug sensory bin:

Next I created two bins with the dry pinto beans. First was a jungle animal bin. I found cute jungle animals and some “grass” to add as well. For a little something extra, I added flowers from the Dollar Store. I just cut the flower off the stem using a wire cutter. You could also add some type of tree to add more to the bin as well.

Here is everything you need to make the jungle sensory bin:

The second bin created with the pinto beans was a farm themed sensory bin. I swear I did have a book for this bin, but the dog literally ate it. So I had to go back to the store and get a new one. But I forgot to take a picture before I wrapped the bin. This bin was super simple. I found a farm animal pack that included animals, trees and the fence pieces. The only other thing I added were the red cups. 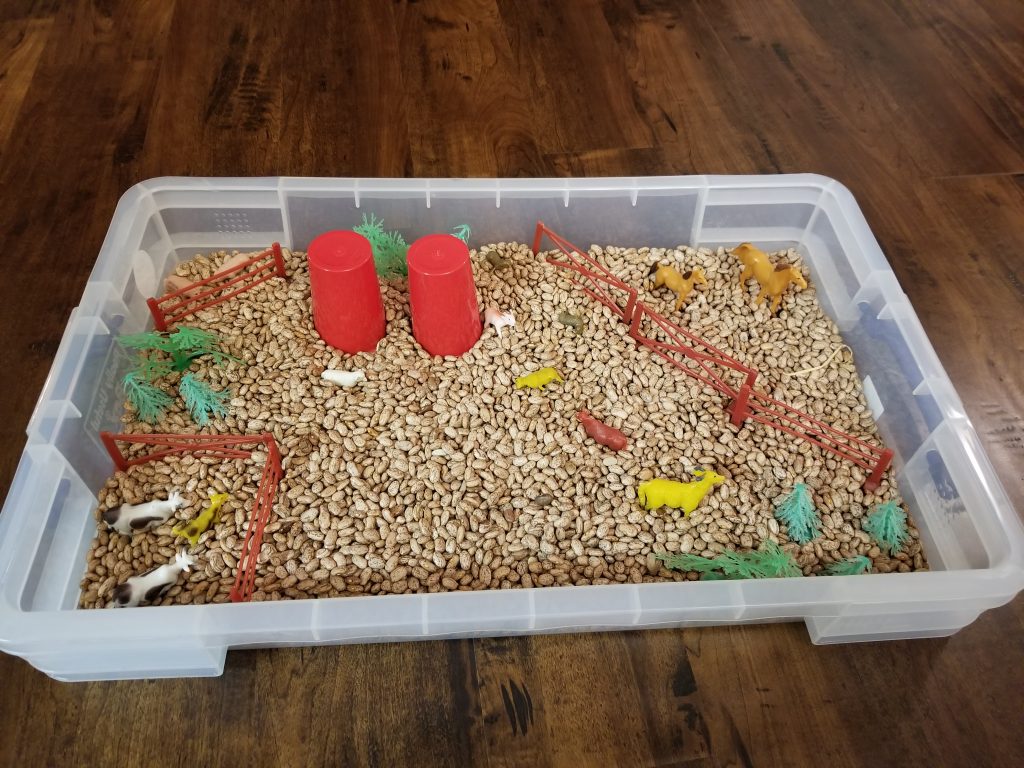 Here is everything you need to make the farm animal sensory bin:

Lastly, I used rice to make three other sensory bins. The first rice bin was an alphabet search sensory bin. I used a printable I had from ABC’s of Literacy that was intended to be used for a magnetic letter sensory bin (here). However, I wanted to use rocks so I could also use them for another bin. So I used a paint marker to write the alphabet on the rocks. I then printed a letter onto each rock. 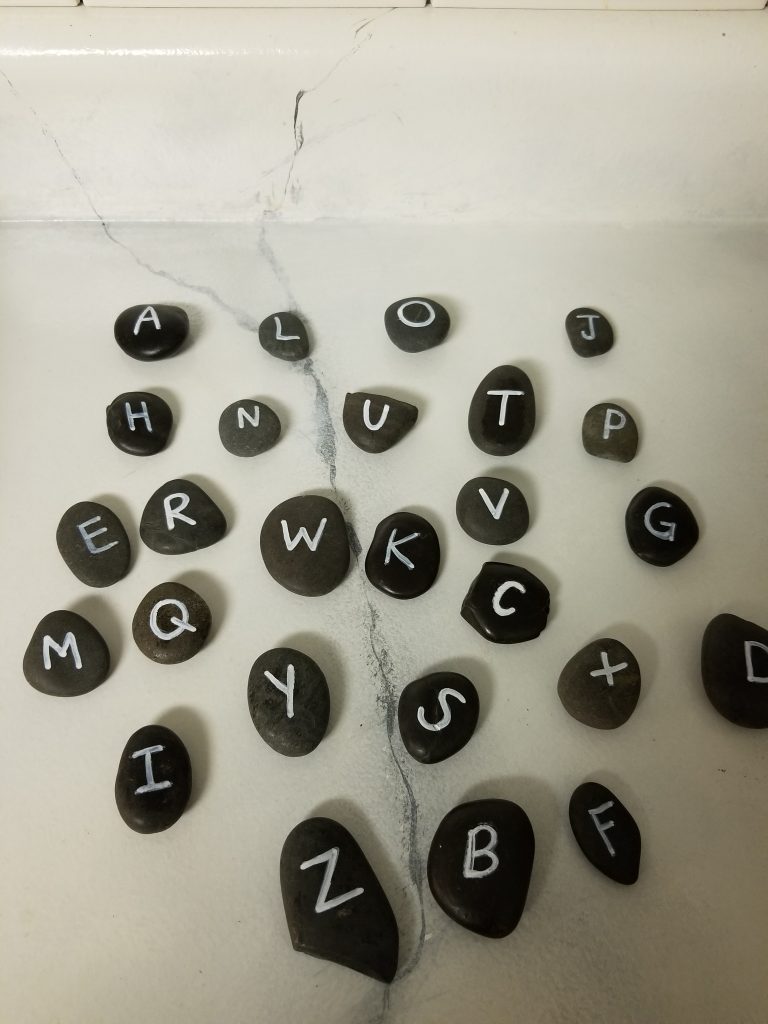 Once those dried I put them into the sensory bin where they can be dug out using a pack of kitchen tools I found at the dollar store. 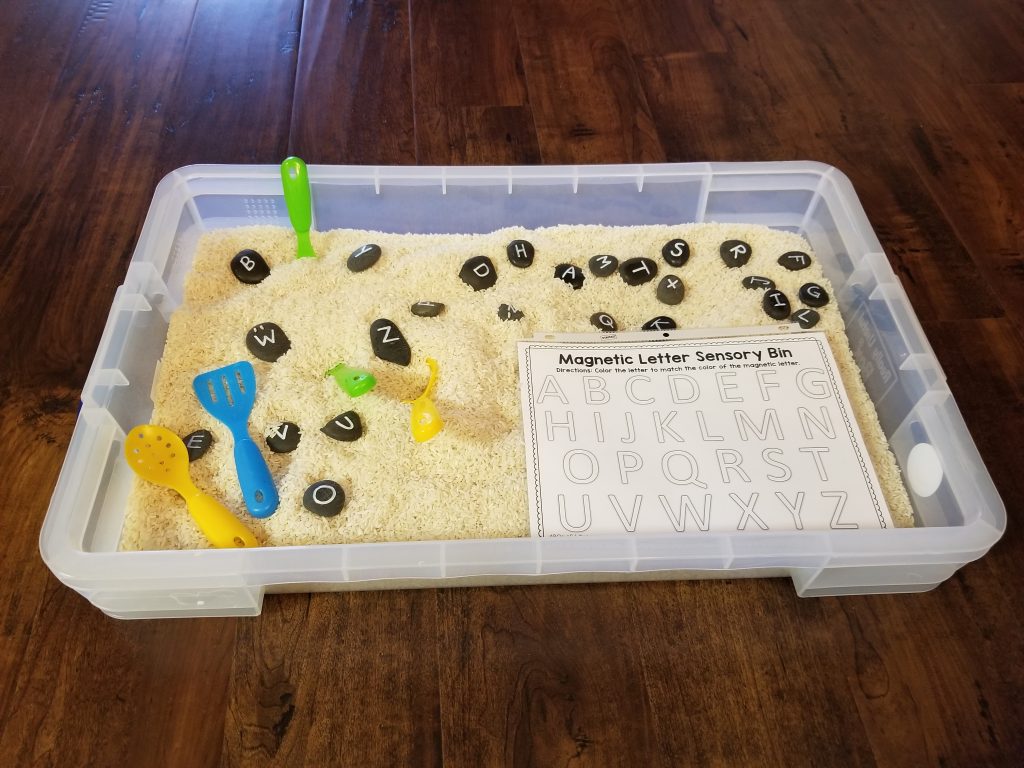 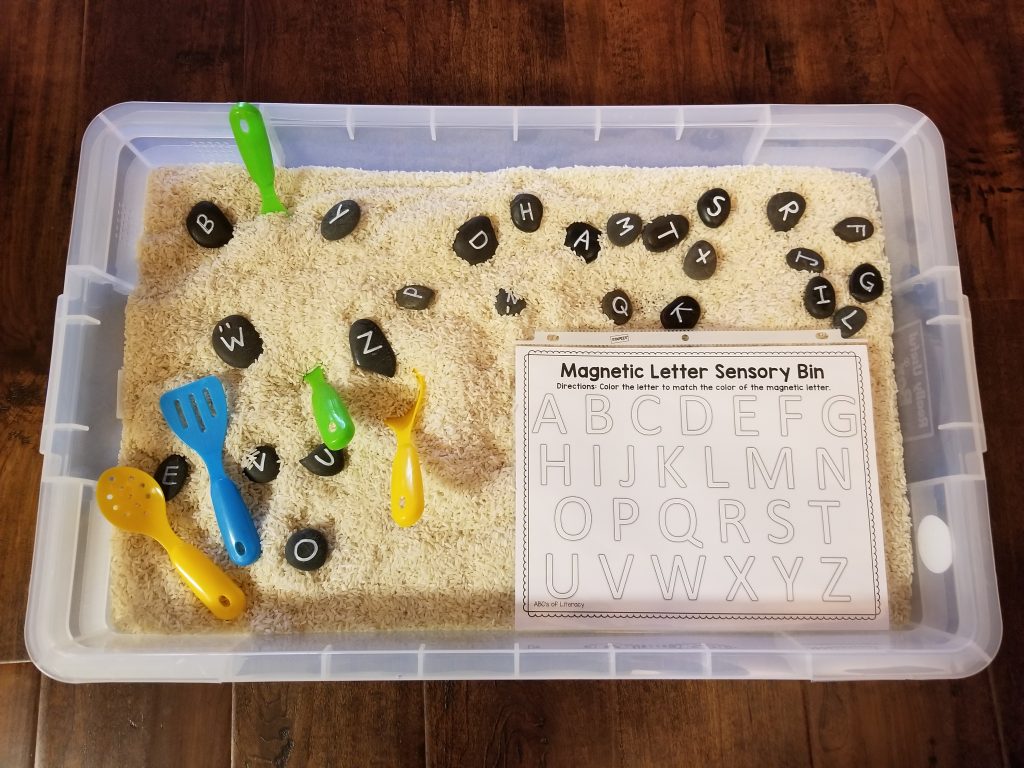 Here is everything you need to make the alphabet sensory bin:

The other sensory bin I wanted to be able to use the sensory bin for was a Goodnight Construction Site Sensory Bin. This book was one of Little MK’s favorite books. So I specifically wanted to create a sensory bin using this book for my nephew. I got the idea from Enchanted Homeschooling Mom (see her bin here). I love how this bin turned out! It is too cute! I couldn’t find glow in the dark stars at the store (and since I’m a procrastinator, I couldn’t order them from Amazon.). So I didn’t make the background like Enchanted Homeschooling Mom. BUT I did have some cute star fabric that I used for the blankets. 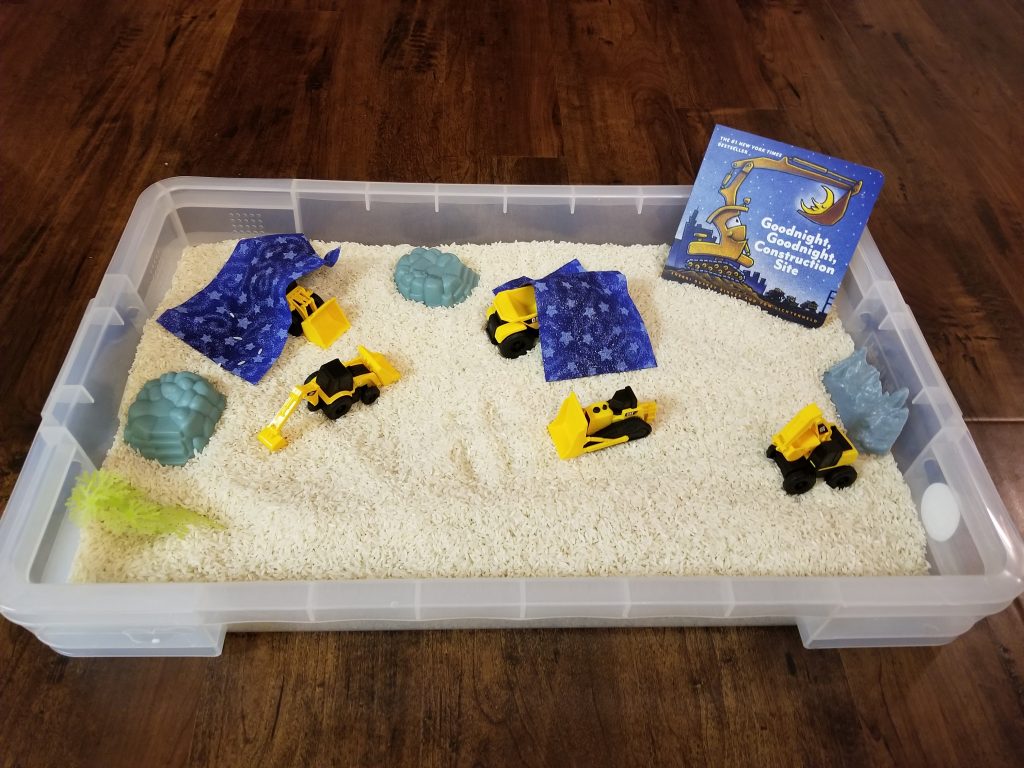 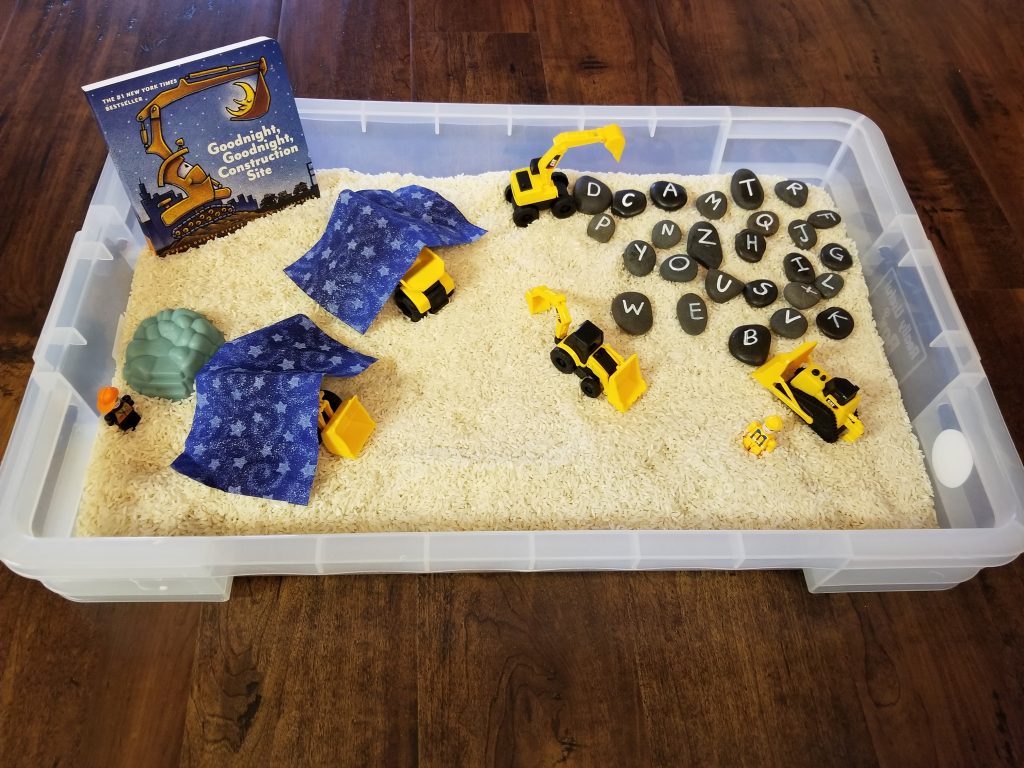 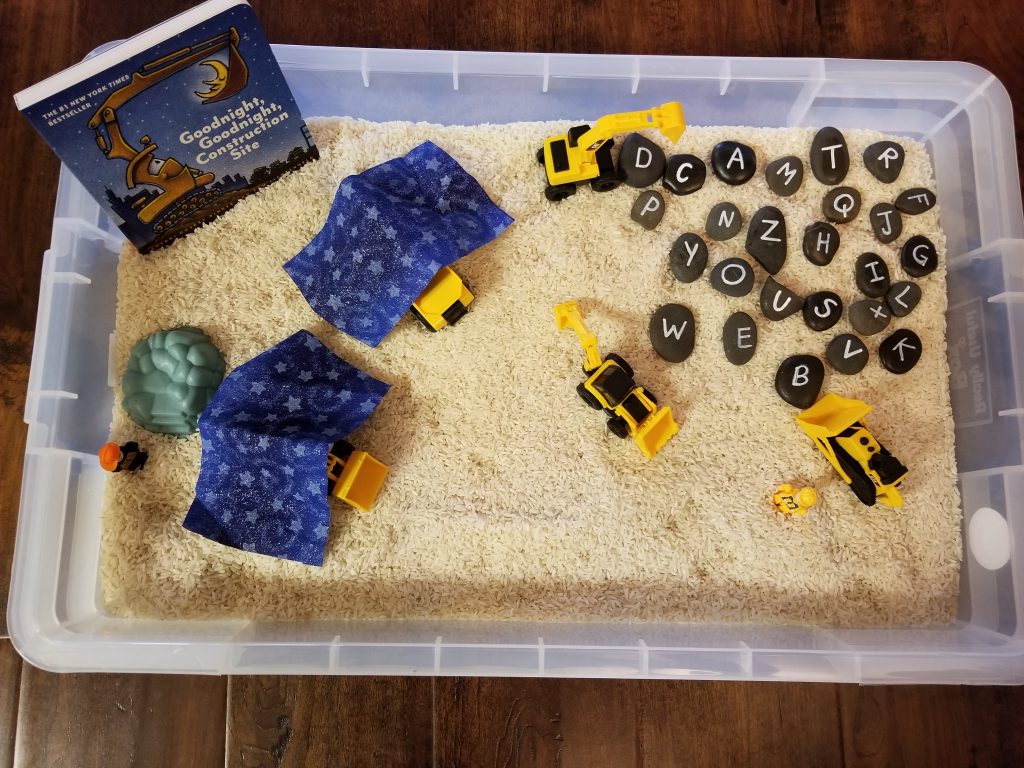 Here is everything you need to make the construction truck sensory bin:

Last but certainly not least is the dinosaur sensory bin. This one was also super easy because I found everything in a pack (trees, rocks, and dinosaurs). The only other thing I added was a Jurassic Park truck, because how could I not… I didn’t make one of these for Little MK but he was begging me too. So it looks like another bin making session is in my future. 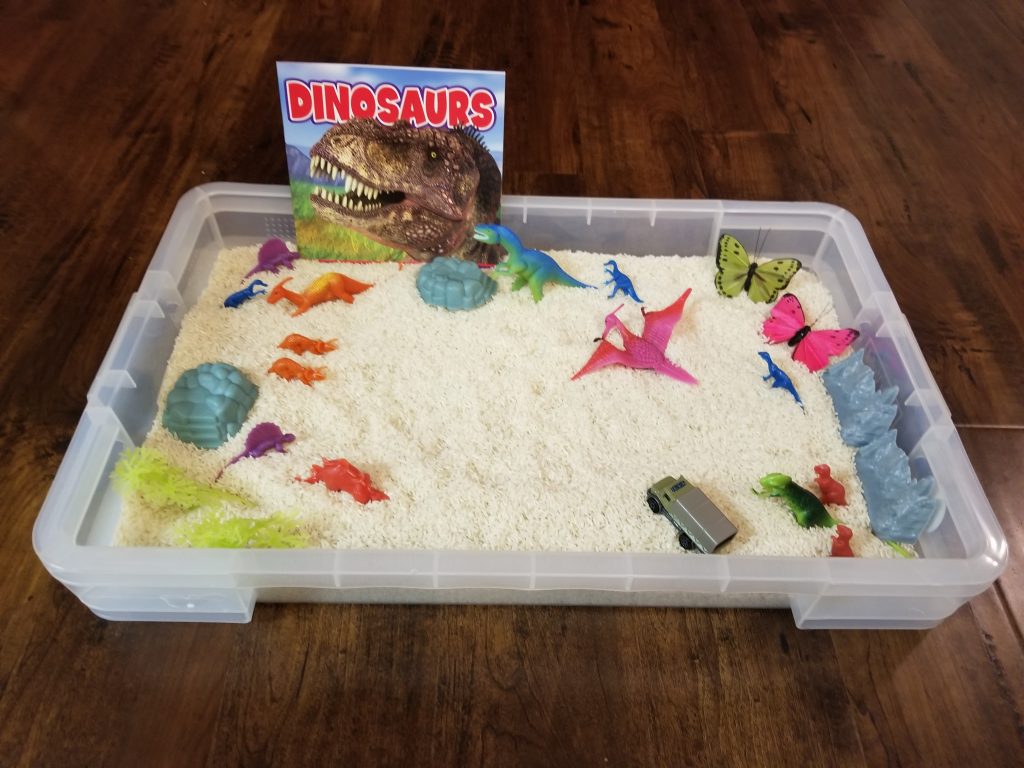 Here is everything you need to make the alphabet sensory bin:

That’s it! It was tons of fun making these bins and my nephew loved them. These bins are great to take out only once in awhile so they don’t lose their novelty. The bins keep Little MK entertained for hours.

How to Make Faux Books from Scrap Wood

2019-A Year in Recap for MK-Creations

The New Addition to our Work Space: The...

Update on Our House Remodel – Are We...

How to Save Money Replacing Your Floor

Kitchen Remodel Before and After

How to Paint Cabinets

Fireplace Room Before and After

I love these! Shaun would have flipped for these! Great idea!

Ryker still plays with them all the time! It keeps him occupied which always helps a mom out 😉 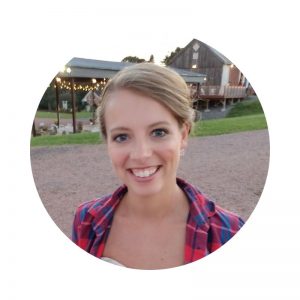 This error message is only visible to WordPress admins

This website uses cookies to improve your experience while you navigate through the website. Out of these cookies, the cookies that are categorized as necessary are stored on your browser as they are essential for the working of basic functionalities of the website. We also use third-party cookies that help us analyze and understand how you use this website. These cookies will be stored in your browser only with your consent. You also have the option to opt-out of these cookies. But opting out of some of these cookies may have an effect on your browsing experience.
Necessary Always Enabled
Necessary cookies are absolutely essential for the website to function properly. This category only includes cookies that ensures basic functionalities and security features of the website. These cookies do not store any personal information.
Non-necessary
Any cookies that may not be particularly necessary for the website to function and is used specifically to collect user personal data via analytics, ads, other embedded contents are termed as non-necessary cookies. It is mandatory to procure user consent prior to running these cookies on your website.
SAVE & ACCEPT